Social Media Outlets – What to Post Where, and When!

I actually know people who have done this, and I’m starting this post out by saying this because I want to stress just how common this is, and how often this happens… people who post on social media completely blind.

Perhaps it’s ignorance because of a generation gap, or maybe it’s just a lack of interest in “that side of the business”, maybe you think you know what you’re doing because … it should be self-explanatory right?  Post a photo on Facebook of something relevant and say something clever to go with it. Hope it gets lots of followers and shares. Done. If you’re shaking your head alongside me, then you understand.

A good social media strategy takes planning and a lot of thought ahead of time. This means writing things down using something you can erase, like a white board with markers, or a chalkboard, or even a pencil and paper, or spreadsheet. You’ll need a log of what you are doing, plan to do and have done before. You’ll need to know what works and what doesn’t, because it will affect everything you try to do thereafter; knowing what your clients enjoy already. A good strategy also means you need to focus, schedule and create everything you need for your campaign whether by yourself, with a team or using a tool. You can’t just walk into your social media presence out there, and post what you like here and there totally randomly and expect to get anything for it.

We don’t want you to fail at this, which is why we’re writing this! If you will recall, I’ve started this entire post by saying I know people personally who actually do this, and then wonder why nobody cares about their Facebook page, or they haven’t gotten any likes lately. That speaks to the first issue – which is thinking that Facebook is the only platform you need for a social media presence. There are a multitude of social media outlets you can use, and each of them has strengths and weaknesses all their own. They were each made to handle a specific type of post, and knowing this can help you to capitalize on all of them as they were created to be, and can help you make a winning strategy that best suits your business.

We’re starting with Facebook because it seems to be the one everyone recognizes the brand name of even if they (gasp!) don’t use it. Since 2007 Facebook has been shoving people in our faces whether we liked it or not, and they wanted us to like it… so much that it’s all we saw on the computer, it is all we heard about, and before long when we would meet someone, we’d ask if they were on Facebook.

Facebook overtook MySpace as the leading social platform to stay in touch with friends and family, something of a personal digital collage with crowd-sourced sharing that everyone can enjoy. Facebook has been a massive success, because they continue to bring people what they want the most of, and they believe through intelligent controls and switches they can tell what it is you’re interested in, and target you for it. This is exactly what you want to do for your own clients isn’t it? Take a page from Facebook and learn what it is your clients are after, if it’s information, help, a service, a product, or what they need you for. Then deliver it. 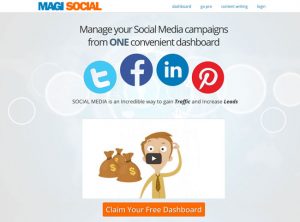 Facebook is the best platform for photos taken behind the scenes, or for a sneak peek at something you want to tease people for later. This could be something as easy as a photo of an infographic on your office wall that you created yourself, with a subject line/description that says, “Is your advertising and branding lifeless? Let us help!” Anything that they’d be interested to see that you do that gives them more information or gives cause for them to agree with the post.

You can also use quotes from someone famous in your line of work, or just someone inspirational you admire who has said something in the past you can blend with your business goals. People actually stop to read those little quotes because they don’t take too much time, and people expect to be enlightened by them. You can caption it yourself, or repeat the quote but it makes a very easy share on Facebook.

Some of these work better than others, but people love love LOVE to talk about themselves, so if you ask a question as though you expect an answer you probably will get them. You’ll never find better engagement than posting questions or polls, especially those with prizes to a random person. Just keep in mind that like anything, these shouldn’t be overdone or people will grow bored, so mix it in with the other types of posts.

If you have a web page and it has a blogroll, you may already have some articles there which you can share with your social community. If you don’t, you may want to source a writer yourself – many great writers can be found who are freelancers and don’t charge a small fortune for an article a day, or even 3 articles a week. If you can work out an arrangement, you’ll get a fresh blog post relevant to your business, and something new to share on Facebook when it’s submitted! You just paste the address to your article on your blog, and when it updates with the thumbnail at the bottom, erase the address in the subject box, and type a little blip about the article. You want people to read it so make them excited!

Facebook has even made an algorithm for the word “Announcement” either in all caps or written this way, it will flag Facebook’s sharing monster to allow it to be seen by more people you’re connected to. So if you’re never in your friends’ news feeds, and you write something that you preface by saying, “ANNOUNCEMENT!” then type whatever you were going to say, you’ll get more people who see it than usual because they flag that one word along with a few others, so people have less of a chance of missing some truly epic life-changing moment from a friend. This means that Facebook is THE best platform to make an announcement about product launches, or new lines, something they can get excited about. The best place for an announcement isn’t even a status post either, it’s in a paid Facebook Ad. If you can, do both!

Videos will play in their entirety on Facebook, but if you are uploading one of your own, be sure you don’t use any copyrighted music or it will get nixed from Facebook fast. They’re the easiest way to go viral which is why so many people are using video advertising online. Video has also been promoted by Facebook, so you’ll see more of it in News Feed. The video subject box should be filled out the same way as any other post, you want them to watch it so get them excited to click on it by teasing what they’ll get to see.